The Collection of Dead Works

The collection consists of works that became technically obsolete, thus inaccessible, due to the turbulent development of web technologies since the last couple of years of the 20 century. The Collection of Dead Works currently contains 18 works.

Networked sound e-poetry piece. Latest Tweet on the topic of kiss and giggeling of a child.

Talks is a work of e-literature, an ever changing networked narrative fuelled by Twitter activity and semantically organised by Zemanta.

Each time the Talks is accessed or reloaded it creates a short social network like narrative.

How? First it creates a text from recent Twitts then is using Zemanta service to extract some overall semantics (tags, related articles). A title of related article is taken for a title of current iteration of the Talks. Then the discussion made of related Twitts (based on tags) is added. (Text sent to Zemanta is not visible to the reader of the Talks.)

And Your Hair / Twit is a small work of e-literature. It takes the current weather condition in Ljubljana (authors home town) and it integrates it into the following sentence: It's [...] and your hair is in a mess. Than it adds posts from different users of Twitter that relate to the same weather condition.

And your hair is in a mess

Web poem that changes with the weather in Ljubljana

Sometime around the year 1990, on the left embankment of the river Ljubljanica, just before Tromostovje one could read the following graffitti: Sonček je in ti si skuštrana (The sun is shining and your hair is in a mess). Later on I learned that the author of this sentance was the poetess and painter Mateja Sever. Her graffitti inspired this poem. I have changes in so much that I have substituted the word Sun by - a few hours ol - feed from the Environmental Agency of the Republic of Slovenia and its data on the weather in Ljubljana.

So, if you are reading the poem in Ljubljana it will describe the same weather as you can see through the window.

English version of the poem takes weather from the BBC Weather Centre, Observations for Ljubljana.

Please note that this project include chinese characters. If you see □□□, ???, ��� or anything similar instead of chinese characters your operating sistem does not include the apropriate fonts. Instaling Chinese fonts will cure this problem.

Poem for 莫海伦 is add-on (small piece of software that adds new functionality to browser). It adds toolbar to browser. Poem for 莫海伦 can be triggered on any web page. If so, the page will slowly, element by element fade to white until whole page is completely white. Process might take up to 2 or 3 minutes per page.

Poem for 莫海伦 is computational visual poem contemplating transience of things and relationships.

The image of any give Web page (or the visible part of the Web page if it is bigger than the computer screen) is understood as a matrix that reproduces itself. The size, height, and width of the reproduction are transformed depending on the matrix. The reproduction is placed in a selected section of the matrix and becomes part of it. The process repeats several times. The result is an unrepeatable visual structure that is based on manipulations of the particular Web page.

Animated 3D alphabet is added to web pages. Letters respond to the typing. You can also move the letters across the web page.

Animated 3D alphabet is added to web pages. Letters respond to the typing.

Changer is an extension, i.e. an additional toolbar for the Firefox Internet browser, which adds a series of dysfunctionalities. Changer enables text and graphic interventions of web pages through the introduction, repositioning, changing, deleting and any possible combination of the four.

Retype te content of any webpae: it's not only what is written. It's also where it's written and who wrote it. 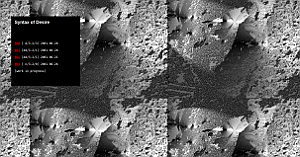 E-poem in form of emails, using subject, e-mail body and fake e-mail addresses of the sender as part of the project content. In Slovene only.

After visitor entered its e-mail address, 20 e-mails were sent to its e-mail.

As email addresses were fake the received e-mails seemed to arrive from 20 Slovene corporations that were among the most visible ones at the time. But instead of expected commercial message or spam the poem was sent.

Assuming that e-mails were displayed by the date and time, a poem appeared in the subject lines of the received e-mails.

Due to spam issues of the mail server the work is no longer active.

Collection of stories and fractal graphic talking about sea, island and their (dream like) inhabitants. There is no index of the stories. Only way to find them is to use the local search engine.
Co-author: Aleksandra Globokar.

Interactive poem (and a 'gallery' of poems co-writen by the 'users'). Work is not awailable any more but a version of it is containd in Interactivalia (under a title 'Sense Nodes Lost'). '[Špelo] v svoji sobi zebe' is in Slovene language only.

Cookies provide a better experience of the web site.